Happy Friday, good people of the blogosphere! It's time for the weekend, and I couldn't be happier. Today, I'm giving you some more great games you can play that'll help your wit and grammar skills while spending time with the family or friends. Unlike last week, these are games you can go to the store and buy. So grab those pens and notebooks and let's get going!

First up, we have Scattergories! 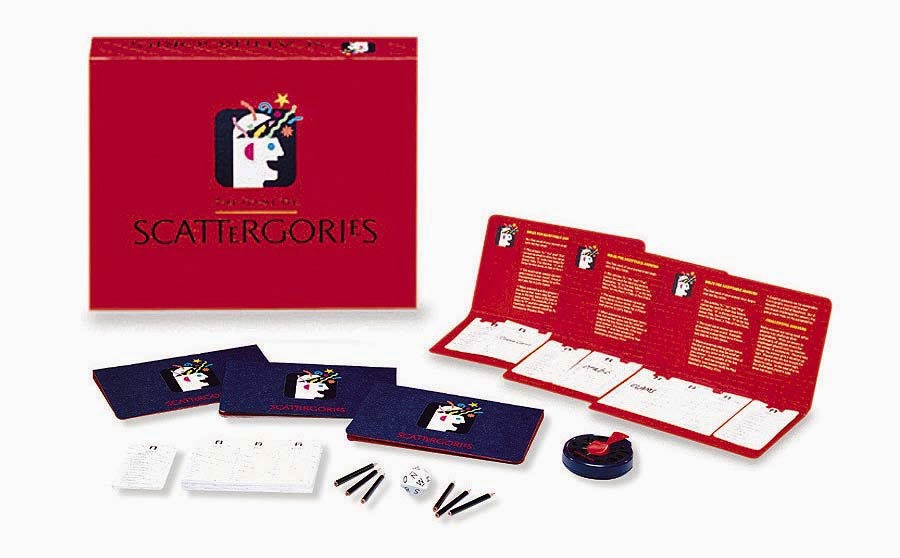 This game is a fun way to see how many words you know that begin with the same letter. You see, you have a die with 26 sides (one letter on each side) and ten categories. You roll the die, start the timer, and everyone tries to fill in the blanks with a word starting with your chosen letter in each category. Bonus points are given if you can come up with descriptive words that also begin with the letter rolled. For example: Food (letter C)-Crusty Cheddar Cheese or Curdled Colby Cheese. Each of those answers are worth three points. It's a seriously fun game that will have you giggling at some of the words people try to pass off. But if you have the exact same answer as someone else, you have to cross it out (no points are given to either of you). So, you have to be creative and think outside the box for this game. 2+ players.

Second, one of my all time favorites, Balderdash. 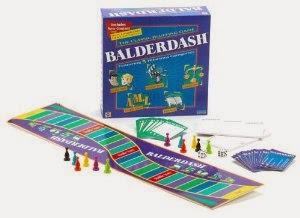 The actual definition of Balderdash is: Senseless talk or writing; nonsense. I freaking love this game because I'm a total word-nerd. Here's how it works: You draw a card with a word and definition on it (only the drawer gets to see the real definition) then read the word out loud to everyone else. They write down the word and have to come up with a definition that'll trick everyone else into believing it's the right one. Whoever drew the card writes down the real definition and collects all the papers. That person then reads the definitions out loud and people get to choose which they think is the right one. This game is a hoot when the reader can't stop laughing long enough to read the definitions, or you have someone in the circle who comes up with clever alternatives. Bonus points for every time you choose the right one out of the submitted ones, OR if folks choose your definition as the right one when it's not. Bigger bonus points if you write the correct definition on your piece of paper. Warning! There are some really obscure words in there! *grin* 3+ players

Third, and one you may not think of as a word game, Pictionary! 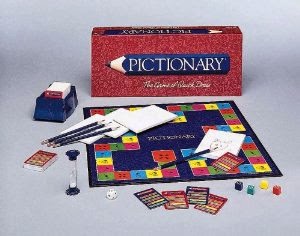 I think this is a super game for writers. You have to take a word and make people guess what it is by bringing them a visual. What better way to flex your descriptive muscles than having to draw something on paper? Besides, you may get an obscure word you've never heard and have to look it up. Great for vocabulary expansion! You get two teams of at least two people each. A card is drawn and you have to get your teammate to guess the word on the card by drawing pictures on a whiteboard. You can do as many of these as time (one minute) allows. Super fun for a weekend with the family or a party game. 4+ players

For my final suggestion, I give you Taboo. 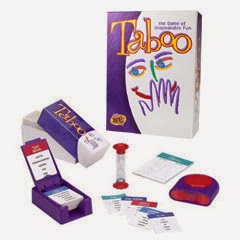 This game will make your brain become a walking Thesaurus. You get two teams of at least two people each. One person tries to get their teammate to guess as many words as they can from the ones on the cards. But there's a catch! You can't use any of the words listed under the main word to get them to say the highlighted one. It becomes difficult to think up alternative ways to communicate your thoughts to your partner. Think: $100,000 Pyramid without the ability to use any word you want because you have a restriction list. One thing you'll love to hate about this game is the buzzer. Someone from the other team stands behind you and makes sure you don't use any of the words on the card. If you do, buzz! and you have to throw that one out. 4+ players


I do hope, if you've never tried any of these, you'll give them a shot. If you don't really want to put out the cash for a pre-boxed game, I have some great, free games on my last Friday Funday post you may want to check out.

What do you think? What's your favorite word/writer game?