Happy Tuesday, everyone! This one is a day late. Sorry! Hope you check it out! 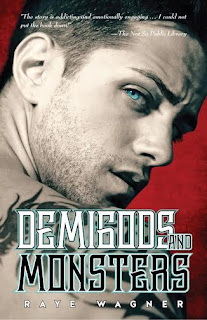 Blurb:
Can Apollo’s curse be broken?

Seventeen-year-old Hope Nicholas is done running. Apollo’s curse has ruled her entire life, limiting her choices and robbing her of the things that matter most. But she refuses to live in fear any longer. In fact, she’s ready to do whatever it takes to break the god’s power over her existence.

When the goddess Artemis instructs Hope to impersonate a demigod and infiltrate a conservatory to get access to the Olympian library, she doesn’t hesitate. As she sees it, there’s nothing left to lose.

But once inside, Hope discovers the only way to get what she needs is to work with her sworn enemies. As the lines between demigod and monster are crossed again and again, Hope has to dig deep for the courage to accept her fate or fight for the freedom to save herself.


This is second in a series
Book one
Curse of the Sphinx
http://amzn.to/1SVmjiC

Author Bio
Raye Wagner grew up just outside of Seattle, Washington. As the second of eight children, she was surrounded by chaos, and read heaps of fantasy to escape the mayhem.

One sunny afternoon, the history of Apollo's ancient curse and the myth of the Sphinx dropped into her mind, and stories have haunted her ever since. Raye writes young adult fiction for teens and adults.

Curse of the Sphinx, a YA urban mythology, is her first novel. Demigods and Monsters, the second book in the Sphinx series, will be released April 2016.

I typeset this book and formatted it for digital. It's beautiful. You must take a look!