Happy Tuesday number THREE! Another post full of pretty for you to look at. I do hope you enjoy it. If you think you might like to enter to win book one of this series in paperback, I have a giveaway running over on the IBGW blog here. Let's get going!

Blurb:
17-year old November Lonergan spent her whole life feeling like an outsider, like she was different. She was right. She is a reaper like her mother; like her two cousins, Kai and Tristin. The supernatural world believes they are part of a prophecy to save them from an evil power known as the Grove. Ember just wants to survive high school and fix the fallout from bringing back Quinn. And there is a lot of fallout. Mace and Allister are missing, her uncle Alex is dead and Quinn seems to disappear a little more every day.

Now, a group of demonic hunters known as the Legionaries has resurfaced, threatening the reapers and anybody who stands with them. They are making good on their threats too; killing those closest to the pack and almost exposing the supernatural world to the humans in the process. Their only hope of defeating the Legionaries involves trusting a stranger to perform a dangerous spell to advance Ember and her cousin's powers. But Ember has a secret; a secret she can't tell the pack. When Mace left, so did her magic and without it all of their planning means nothing.

An attack on pack allies leaves Donovan missing along with a mysterious girl named Evangeline who may play a bigger part in this than any of them realize. As the Legionaries are closing in, the pack must trust their enemies, enter hostile territories, and play a dangerous game of cat and mouse with the psychopath holding Mace. Their entire plan lynches on rescuing Mace and restoring Ember’s magic, but rescuing Mace could mean losing one member of the group in his place...possibly forever.

Ready for that cover? Here you go! 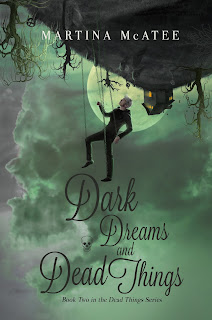 Bio: Martina McAtee lives in Jupiter, Florida with her teenage daughters, her best friend, two attack Chihuahua’s and two shady looking cats. By day she is a registered nurse but by night she writes young adult books about reapers, zombies, werewolves and other supernatural creatures. When she isn’t working, teaching or writing she’s reading or watching shows involving reapers, zombies, werewolves and other supernatural creatures.

I have to say, I LOVE this cover! What do you think?

Well, that's really and truly all for today, folks! Until next time, WRITE ON!