Happy Tuesday, good people of the blogosphere! Today brings us to the third and last post of my series on commas. It falls into the bracket of punctuation posts I've been running here on the blog as well. This post will cover a few more uses of that tiny punctuation mark that gives us all so many headaches. To be honest, there are many more uses for the comma than I covered over these three posts. Know them all and, above all else, use good judgment when placing them. A comma can stilt the flow of your text if used too often. Grab those pens and notebooks and let's get going! 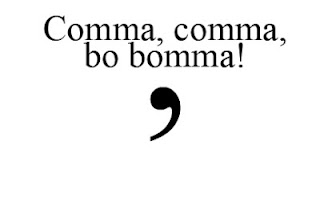 As always, I'll be using The Chicago Manual of Style 15th Edition as a guide. If you're an editor, I know you have a style guide lying around. This is mine.

If you missed the first two comma posts, check them out here:
Part 1
Part 2

Three more ways to use a comma:

When there are two or more adjectives preceding a noun. If you're describing something and need more than two adjectives that could be joined by "and" without disrupting the description, they get a comma between. Remember, a comma denotes a pause and also something left out. Examples:

She wore a big, blue, floppy hat to the beach.
He had swollen, hairy toes.
She went to the only traditional Catholic church in town.

Commas are also used to separate homonyms. If you have more than one instance of a word and a pause is needed between them because they mean different things, they get a comma. Examples:
They walked in, in groups of six.
If whatever it is, is a good thing, it's okay.

I hope these three posts have helped you all in some small way. I'll be back tomorrow with more punctuation!