Happy Tuesday, good people of the blogosphere! Today, I'm back to tips and tricks to keep your writing interesting. As many of you may know, I'm an editor as well as a writer. One of the things I notice people doing a lot of is starting too many sentences in the same paragraph with the same word. Another thing is repeating a word in a sentence. While both of these may seem like minor details, when paid attention to and rectified, it can create a world of difference in your final product. Remember to use your thesaurus! 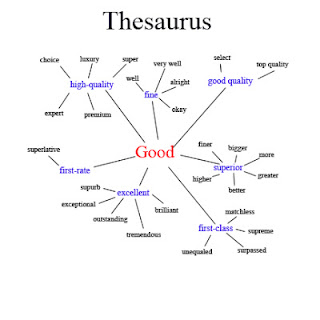 Example time! Let's set the stage: Darren just had a fight with his girlfriend of six years.

He went through the door into the living room and exited out the back door. He walked over to his car and pulled open the driver's side door. He got in, slamming the door behind him, put the key in the ignition, started the car, and peeled out of the parking lot. He drove a long time before pulling over and getting out; giving the door another hard slam as he got out of the car.

As you can probably see, there are a ton of no-nos in the paragraph above. While there are many ways to re-write it, let's try on the first pass to eliminate starting each sentence with he.

Darren went through the door into the living room and exited out the back door. Walking over to the car, he pulled open the driver's side door, got in, slammed the door, put the key in the ignition, started the car, and peeled out of the parking lot. It was a long time before he pulled over, got out, and gave the door another hard slam.

Now, while we fixed the problem with the word he, you can tell we've created other issues. How about we fix a couple (like that looooong second sentence)?

Darren rushed through the living room and out the back, leaping down the three short steps to the driveway. Stomping to the car, he got in, started it, and peeled out of the lot. It was a long time before he pulled over and got back out; taking his anger out on the door as he shoved it closed behind him.

Remember, you have to name the character at some point before you can use the pronoun he. Try not to bore your readers by giving them a blow-by-blow, either. If you do a good job with actions, they'll be able to grasp that your character is pissed, sad, or happy. By the time we say he's taking his anger out on the door, we've already set the stage and given plenty of action to show how he feels. If you tell, it might look like this:

Darren, madder than a mashed cat, left in his car and drove a long time before pulling over and getting out.

While there are less words, it's not as fun to read. Keep it simple, vary your word usage, and show your reader what they should be picturing in their head.

I hope you'll try writing the world's worst paragraph and fixing it. For this is how one learns a new skill. Practice makes permanent.