Happy Monday, good people of the blogosphere! I know you all remember Ms. Tania Penn. Today, she's here to give us a guest post about creating a book trailer. Keeping with my Monday posts from the authors attending UtopYA Con in June, 2014, I'm excited to bring you an inside look at what it takes to create something so central to marketing your book. Without further blabbering, I give you:

The Art of Creating a Book Trailer
by Tania Penn 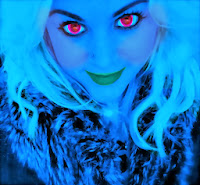 I found out I had the knack by accident, to make book trailers last Halloween. I had been making short one minute films for my  (at the time) 6 year old son — he would set his Transformer toys up, put them in a graveyard made out of wiki sticks and play-doh, then I would set it to spooky music while he narrated. We filmed his two ciclids making a black and white silent film set to music for a first grade school project. After a few of those and seeing some book trailers on Facebook, I wondered if maybe I could do the same thing using my Adobe Premiere Elements program that I was using for my son. To my astonishment, it worked! I made my first practice one for The Morning Star, using photographs of actors who were my muse, added some titles and text, and set it to my song that I considered the theme song. Not bad! After showing it to a few author friends, the requests came in. With each one, I discovered I could churn them out pretty quick — about a video a day. All I needed was their idea(s) for their muses, theme song, any particular photos or video they wanted me to put in there, and most importantly, if their book hadn’t been released yet, a bit of what it was about and the synopsis. 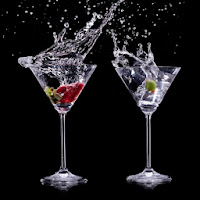 My first week, I made about 3 films - I was on a roll! I thought it would be a great way to supplement my income by doing something I loved to do, was pretty good at doing and was getting better at, all whilst sitting on my arse sipping coffee (or a martini, depending on the time!). So now, I had a few videos under my belt (that I did for free, or for some e-book trades), I decided to build my website, create my pay pal account, and sit back and watch the requests for my services come flooding in, now that I had a nice portfolio of videos for authors to check out. On top of that, I started tinkering with book cover design and found that it was pretty easy as well. I was on a roll! I was especially excited because I was drowning in that proverbial pool known as writers block, blech! I needed that creative outlet, and this would give it to me.

Unfortunately, my martini wishes and caviar dreams didn’t exactly pan out…Yet, at least. Call it lack of marketing (I suck at self promotion!), disinterest, a flooded market, perhaps? I priced accordingly after doing some research. Still, I enjoy making them for myself, as well as for the occasional trade. Now that I’ve started writing again with a vengeance, it doesn’t give me as much time for video making (except my own teaser trailers, as well as those for good friends). Truth be told, having the right tools such as iMovie or Adobe, it’s a fun and easy thing to do. However, if any of you are interested, hit me up at www.pennpalproductions.com or e-mail me at twistedwritertanita [at] gmail [dot] com, and I can show you samples of my work on You Tube!

Now that you all know where to get your book trailer done, get on over there and hire Tania! If you'd like to read an interview with Ms. Penn, go here.

Don't forget to add The Morning Star to your Goodreads shelf!

Do you have a book trailer? Have you ever considered getting one made? What's stopping you?