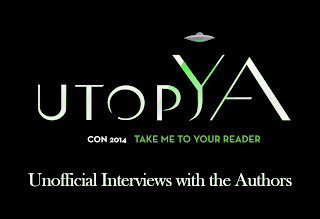 Happy Monday, blogospherians! In keeping with our regularly scheduled program with the authors of UtopYA Con 2014 here on the blog, I bring you a guest post from N.L. Greene. If you read her author interview from last week, you'll know she's part of a writing team! Today, she's going to tell us a little about that. I love this post and I think she brings a unique perspective to the process of writing. Now, coffee, pen, and notebook in hand, I open the floor to Ms. Greene. 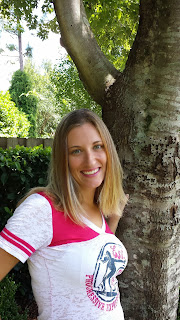 Hi Everyone! I want to start off by saying thanks so much for stopping by and taking the time to read my post. I also wanted to say a huge THANK YOU to Jo for not only having me but also for putting this whole UtopYA Author feature together!!

So I’m going to be totally honest here and tell you all that this is the first guest post I’ve ever written. I usually just do interviews where all I have to do is answer the questions and then I’m done. I know it’s lame but safe. *winks* I not only hope I don’t totally fail, but that you actually find my post helpful. So here goes...I wanted to talk a little bit about Co-writing and Solo-writing, since I’ve done both and learned that just like everything else in life, they both have their pros and cons but both can be successful.

I started my writing career about three years ago and did it as a co-author. My best friend and I both wanted to write but were terrified of doing it alone. We were scared that after spending months of pouring our heart and soul onto paper, we would be told that we weren’t good enough or that people would make fun of what we wrote. The fear of being vulnerable and exposed and then to be rejected was just too much, so neither of us tried. But then we came up with the idea of doing it together, under a pen name, and suddenly it didn’t seem so terrifying. From then on, it seemed much easier. We were each other’s cheerleader and support team, both equally emotionally involved in the book and both understanding the importance of what we were doing. On top of that, there was someone that could take over when the other was stumped, there were two people giving out ideas that, even if they weren’t great, sparked a new ones, and there was someone always there that just wanted to help you.

Like I said before though, everything has its pros and its cons. Though we didn’t have many issues, there were some that we had to work through. Being BFF’s for so long gave us an advantage over some other writing teams. Neither one of us had a problem being blunt or honest. In my opinion, that can make or break a writing duo. If you want your book to be good, you have to be willing to listen to someone when they tell you it isn’t as good as it can be and be willing to change it. The work load can also be an issue. Undoubtedly, at times, someone will do more than the other. The key is recognizing this as it happens and dealing with it accordingly. Everyone has different strengths and weakness and sometimes one will have to do a little more than the other if it means better success of the book. You have to push your pride away and do what is best for the team.

In the end, I think if the writing team is good and they work well together, the pros will always outweigh the cons and they will prove to be successful. I also think sometimes, writing as a team will give that push to someone that may not have ever put their words and thoughts to paper had they not had that other person to lean on, like we did.

All that being said, I also decided to become a solo-author. Why, you ask, since I seemed to be just fine co-writing? Well one other con to co-writing is that sometimes you aren’t both interested in actually writing the same thing. Angela is YA Paranormal all the way. It’s the only thing she reads, therefore the only thing she is interested in writing. Which is totally understandable, but not true for myself. I love all genres of books and really wanted to try writing in something other from what we had already done. It wasn’t easy though. Writing by myself made me realize a whole new set of pressure. Everything was on me. If I got stuck or lost, there wasn’t really anyone to pick up the story and run with it or straighten it out for me. I had to be creative and come up with ideas all on my own. And the vulnerability that I felt when the book came out was double because everyone knew that I wrote the whole book and if they didn’t’ like something, that was on me. 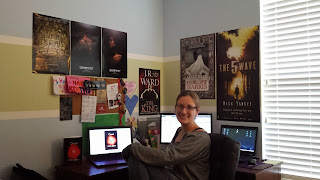 However, the sense of accomplishment and the pride I felt when I published my very own book was different than before. I had done something all by myself and it felt so good to know that I had set my mind to it and finished it. I also realized that I worked much faster by myself. Not having to rely on someone else to go back and check your work or having to rewrite a portion of the story because you both didn’t agree with what was happening gave me a freedom I hadn’t had before. The lack of pressure of having to hurry because someone wasn't waiting on me made me more relaxed and since I wasn’t so stressed, the story flowed much quicker.

So now that I have completely contradicted every statement I made throughout this post, I’ll say this. All of the above were my personal experiences and every individual is different. But my main point is this: If you enjoy writing or have someone in your head whispering stories that are just awesome, figure out how to get them on paper. I gave you two different examples of how to do that and what my experiences were, but there are tons of ways to achieve your goal, you just have to find what way works for you. And in some ways, like with me, more than one will work.

Well…I think that about covers it! I hope you found something helpful in what I had to say and that I didn’t completely bore you! Thanks for taking the time to read my post! Bye!!

Wow! I hope you all enjoyed that! Just in case you missed it last week, here's the information for Ms. Greene's book, Twisted, that'll be featured on the sidebar of the blog for the next week:

Synopsis:
Growing up isn’t always easy. But for most teenage girls, they can rely on their best friend to help them get through the process. A BFF is something that is truly treasured and completely irreplaceable. You share all of your secrets, and are loyal and honest with each other, even when you’re acting just a little bit crazy. You have each other’s backs no matter what and you form a bond that is virtually unbreakable.

Nat and Mel have been bestie’s since childhood and Nat has followed her blindly ever since. But as Nat’s friendship with Mel begins to lead her down the wrong path, she starts to question the sincerity of their relationship. Nat starts to see Mel’s manipulative, deceitful ways become more focused on her. Will Natalie hold on tight to the friendship she’s had her entire life, no matter what it cost her? Or will she let her heart lead her to a relationship that’s not so twisted.

Author Bio:
N.L. Greene, who is 1/2 of the author duo Riana Lucas, has decided to venture outside of the Fantasy world that she and her best friend created with Poppy and The Deadly Flowers Series to write a few books on her own. While she loves working with her best friend, writing solo has allowed her to explore interest that had solely been her own. She spends a lot of time reading her favorite authors which range all over the place and in every genre, but spends just as much time with her husband and two daughters, traveling, shopping, and playing video games. Nichole was born in Pennsylvania but grew up in Florida, where she and her high school sweetheart live with their two children.

Give N.L. Greene a follow on Goodreads or her Author Blog

I hope you all enjoyed this post and learned a little bit, too! Do you think you'll ever co-author a book?