Happy Wednesday, good people of the blogosphere! It's Wednesday and time for another book review. I can tell you're excited by the way you're reading this post. This book came to me under different circumstances than my usual review titles. If you didn't know, I have one of my novels (The Bird) on Amazon with a small press: California Times Publishing. That link will take you to their homepage. Well, back at the end of last year, Jeff, the head guy of CAP, asked a bunch of us if we'd read some CAP books and write reviews. Those of us that agreed were assigned random books from a list (no author swapped reviews with another), and we bought them to add to our TBR lists. This is the first of those titles to be reviewed by me. Yes, it'll go in the 2015 Review Team's pool!

Enough of my yammering! Let's get to information about the book up for review today: 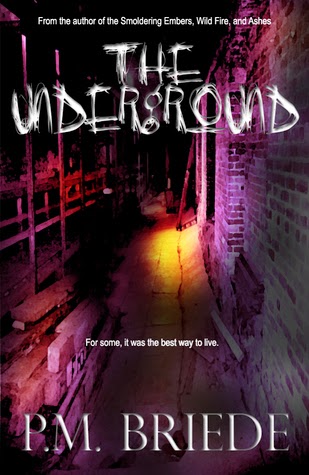 Synopsis:
In 1889, most of the city of Seattle burnt to the ground. The residents rebounded by using the ruin remnants to create the foundation for the new and improved city.

In 1965, Bill Spediel struck a deal with the new metropolis to turn a profit on the tragedy from almost a century earlier. Thus, The Underground was born, immediately spawning talk of ghosts.

In recent years, the myths morphed into stories of actual people living among the trash and filth that had built up beneath the city. These mythical people had become mockingly referred to as groundlings by the locals.

As the city is now held in the grips of a serial killer, Oz Seidon can't seem to focus on anything other than the groundlings. Having never put much stock into them before, a recent rash of sightings has piqued his curiosity. Oz intends to disprove the legend, using the research as an excuse to focus on something other than death, that is, until he stumbles upon one and learns how close to this story he really is.

**Due to sexual situations, this book is for readers age 18+**

***Will not appear in review elsewhere. I really like the tone of the cover on this book, but I think the tiny text in the middle is unnecessary and gets lost at small sizes. Meh, just an opinion (and you know what folks say about those).***

Let's move on to the review!

I snagged this book on Amazon back in December, when I got a request from the publisher to review it. I read the sample and was intrigued enough to go on and buy the book. It was added to the review pile, and I picked it back up last week to read on. I devoured the story of The Underground for a number of reasons. Let's get to why, shall we?

From a Reader's Perspective:
This is the first cult book I've read. It was scary, intriguing, and nauseating at the same time. My toes curled at some of the descriptions about Izzy's life underground. I loved the characters. They weren't flat, and I certainly won't be forgetting them anytime soon. Pacing was slow at first, but when it kicked in and the action started, it didn't stop until the end. I'd say it was about halfway through when it really took off. One thing I love about books like this are the surprises you don't see coming. There are zero hints in the text at what happens until you get to the end and look back. That's when the ah-ha! hits you. Pieces of the puzzle so delightfully crafted click into place with a perfect interlock. Just when I thought I knew what was gonna happen, I was thrown for a loop. Loved it.

There are a few sexually explicit scenes in the novel, but they're not there just because. Those scenes are teaching you something about the characters and their growth as the story moves along. I'm not gonna lie; it was so hard to read the descriptions. I went green a time or two. But, the cold truth is often a bitter pill to swallow.

So much is going on in this book, and the author did such a great job of staying on track, working in the surprises, and showing an excellent visual of Seattle, I was drawn right in and held fast.

From an Editor's Perspective:
Errors like this: "Izzy very rarely wore anything other than her anger opening." (not sure, but I think that's supposed to be "openly") and "...responsible for all the floaters, we're going to look like genius'!" (I believe that should be "geniuses"), along with dropped/misplaced commas, and other errant apostrophes leave me without the ability to give a star for editing.

Rating:
1 Star for world-building
1 Star for surprising me more than once
1 Star for not shying away in descriptions
1 Star for pacing and an amazing plot
-1 Star for editing
Overall: 4 out of 5 Stars. Highly recommended if you love an excellent story with great twists to keep you guessing.

Have you ever read a cult-type book? What did you take away from it?