Happy Wednesday, everyone! Today, I'm back with a book review. I also read Cinder over the last month, and I'll be writing a review for that one next week. This one and the other will go in the 2015 Review Team pool. Wow, those ladies and gentlemen are doing a ton of reading 292 reviews? Wow. Check out the reviews here. As always, I'll start with information about the book and go from there. Ready? Let's gooooo! 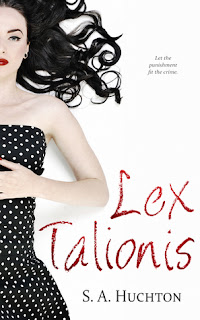 Blurb:
Alexandria Ross was only sure about one thing: her best friend Miranda. So when the seemingly random act of violence that steals Randi's life is revealed as cold-blooded murder, Andria doesn't get mad...

Driven with purpose, she changes the course of her life to set the scales of justice back in balance. Psychological warfare is her specialty, and the secrets of her enemies are her weapons.

The players take their positions on the board…

But little do they know that the game is rigged.

Now that you know all about it, let's move on to the review.

***Will not appear in review elsewhere. What really got me interested in this book from day one was the cover. Then, when I read the tag line, I was hooked. I didn't even need a blurb at that point. I was totally sold. Props to the author.***

Now, I snagged a copy of Lex Talionis on Amazon, but I also picked up a copy of the paperback when I happened to be at the same book conference as Ms. Huchton. It was the bound and glued version I consumed in a day. That's right, it captivated me so hard I just couldn't put it down. But you're probably reading this review to learn what was good, bad, and ugly. Let's get to that.

From a Reader's Perspective:
I'd love to have a totally amazing friend like Lexi. She's fierce but loyal, and believes a woman deserves more and can do anything she puts her mind to if she uses the resources bestowed by nature. I loved her resolve to right wrongs. There were no holds barred. Yes. This is the thing all women should embrace. I eagerly consumed words as I waited for her to exact the revenge due.

I found the first round a bit lacking in emotional punch. When the time came, she didn't feel quite as much as I thought she might. While she was a private, reserved person who didn't show her emotions outwardly to everyone, I did feel the first situation could've had a bit more electrical charge.

However, I moved past it and put it to the emotional control factor of Lexi.

Who had done whatever had been done kept me guessing, and at the reveal I was stunned. I totally punched the air. Yeah, lame or whatever, but I was happy at the ending, and my fistpump shows how invested in the outcome I was. There was also never a time when I felt the pace dragged on.

From an Editor's Perspective:
There were little things here and there, but nothing to write home about. As in most books, a nominal number of errors slip through the cracks.
Rating:
1 star for making me care about the outcome
.5 star for a smart, self-controlled MC
-.5 star for the lack of punch in that pivotal scene
1 star for pacing and plot awesomeness
1 star for the overall theme and keeping me guessing
1 star for editing
Overall: 4.5/5 stars. I round up when clicking stars, so you'll see a 5. Recommended if you love books with a sassy female MC.
What do you think? Did you read it? Plan to?