Happy Tuesday! I'm back with another book review for you all. Grab your coffee or tea, get warm, and let's get going!

First, a little about the book up for review today: 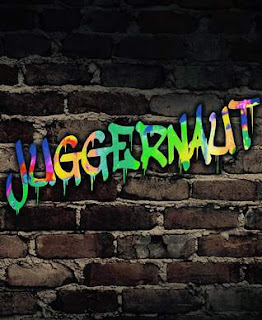 jug·ger·naut
ˈjəɡərˌnôt/
noun;
1. A literal or metaphorical force regarded as mercilessly destructive and unstoppable
2. Any terrible force, especially one that destroys or that demands complete self-sacrifice

In other words, me.
I truly was a dancing, singing, man-plowing, alcohol-guzzling, human wrecking ball of fun.
With a reputation for chaos so legendary, I made a career out of it.
Men came (pun intended), men went, but as long as I had my girls and Sunday brunches, I was solid.
I didn’t need a man to complete me. Hell no, I was in total control of my destiny.

But see, that’s where I went wrong.
I challenged the universe.
It accepted by sending a man who knew my weaknesses.
All it took was lemon drops, one kiss and a wish.
By granting it, I doomed us both.
No mortal man could handle my kind of destruction forever.
Even if he begged for it.
I was called Juggernaut for a reason.
In my case, be careful what you wish for was very, very, literal.

He really should have listened…

On to the good stuff!

I picked this paperback up at Great Lakes Book Bash in October of 2017. Why did I grab it? Well, I heard it was based on a true story. I love books based on true stories. I dove in right after I finished Weeds of Detroit, and I gobbled this book up just as quickly. Anyone who calls their circle of friends "The Sh*t" is someone I want to see into the mind of. It's awesome how books give you that ability. Anyway, let's get to the review!

From a Reader's Perspective:
Oh, where to start? Maybe that I identified with one of the characters right off the bat? Our MC is named Taylor (aka The Juggernaut), and she's a firecracker. Outspoken, brash, and tougher than a box of finishing nails, this lady's antics will leave you with your jaw hanging. But that wasn't the best thing about her. No. She's also fiercely loyal. That was the trait that had me rooting for her through the whole book. Loyalty is everything to me, and Taylor has it in spades. I wanted her to get the guy, and I needed her to have a happily ever after. That's the tantamount of a great read, in my opinion, and "Juggernaut" knocked it out of the park.
As far as flow, the book did a great job of going from A to Z without meandering along the way. There were a few stories on the side in there, but I felt they were necessary to show Taylor's personality, the friend group dynamic, and how much she'd be willing to sacrifice for someone else.
There's not a lot of flowery stuff in this book. It gets right to the point (which I love), and world-building was done in a direct way. I could see the scenes in my head, but I didn't get bogged down in details.
Pacing was right on the mark. It starts a little slow, with just enough to hook you, and then it takes you on a wild ride to the end. There was never a time I wanted it to speed up or slow down.

From an Editor's Perspective:
There were several typos and grammatical errors, but the story was so dang good, I was able to ignore them after a while. If you're a stickler for this kind of thing, you'll need to turn that off. I can only give half a star for editing.

Rating:
1 Star for giving me characters that made me laugh, get angry, and fist punch the air
1 Star for flow
1 Star for world building
1 Star for pacing
.5 Stars for editing
Overall: 4.5 out of 5 stars, but I round up, so this goes to five. Highly recommended if you love a great best friend read with a romance that'll make you sigh.

What do you think? Have you read it? Plan to?