Happy Thursday, good people of the blogosphere!! Today I'm going to let you in on the idea behind Shelia, book three of my Mystic series. So, without any ado whatsoever, here you go! 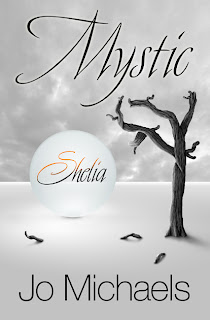 Synopsis:
After a horrible accident takes the lives of her parents, Shelia Morgan is placed in the care of her Aunt Ivy and Uncle Melvin. For six years they work her like a slave. On her twelfth birthday, Uncle Melvin makes Shelia an offer that will destroy her life.

When she turns 19, the ugly truth about her past comes out during a therapy session, Uncle Melvin is arrested, and she's placed in the sights of everyone in town. Hurling insults, objects, and threats, the townspeople side with her uncle and call Shelia a liar. She loses her job, her boyfriend, and her freedom in one day. When a girl named Markaza shows up and tells Shelia she's part of a group of young women destined to save the world, Shelia begins to dream of a new life and true freedom from her personal demons.

She tells the jury her story and boards a plane destined for New York and her new life. Once there, she meets Bronya and Lily: Two other young women with special powers they must learn to harness in order to fight an evil that will rise on December 21, 2012, and destroy the world.

Markaza boards a plane to Atlanta to save the life of a young lady named Melody before her mind destroys her from the inside out. As Markaza fights for Melody's life, Shelia, Lily, and Bronya throw themselves into their studies and learn that even power from within can get out of control.

Mystic ~ Shelia will be released just before Christmas, 2012.

As a bonus, go check out Home School Your First Grader written by Beth Jones. It's free today on Amazon for Kindle.