Good morning, people of the blogosphere! Today, we're going to talk about relationships. No, I'm not gonna tell you how to catch or keep a man (or woman). This isn't a dating advice blog. I'm talking about relationships between your characters and how to add tension. So grab that pencil and notebook and let's get going! 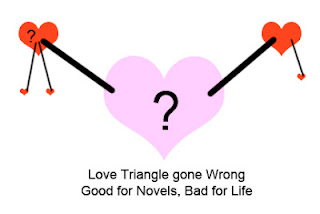 We're all familiar with the classic love triangle: one man two women or one woman and two men. The main character is torn between the two and it heightens the suspense in the book. This triangle has been well used in the Twilight series and most of us are familiar with that one. It's basically Bella loves Edward, Edward loves Bella, Jacob loves Bella, Bella thinks she might love Jacob for a minute but not the same way... You get the idea. This is a great relationship plot with a ton of tension opportunity (especially since Jacob's entire reason for being a wolf is so he can kill Edward and those like him).

In addition to having the love triangle, you also need some reason the main character shouldn't be with one of the love interests in order to make the story work. In Canopy, Lissy loves Jash and Tristan. Jash is fused, Tristan is not, Lissy is a purist and refuses to fuse, being with Jash puts her at risk. In Twilight, Bella loves Jacob and Edward. Edward is a vampire, Jacob is a human who happens to sometimes be a wolf, Bella is human, being with Edward puts her at risk.

If you don't want the whole love triangle thing, then you need to give the relationship some kind of problem to overcome. We all have them so draw from your own life or the lives of those you meet. Get out and talk with people. Find out what issues they've had. Are they still with the person? Why or why not? What was the final straw? Why did they choose to forgive and stay?

Humans are human. They make mistakes. In order to have characters that are believable, you must have characters with personality flaws, impulsive behavior, or indecision issues. Get inside the character's head and try to understand where they're coming from. Don't be judgmental, just tell their story. Using a character's flaw can bring you to a decision about how he/she will change from the beginning of the story to the end. If you have a perfect little character with no flaws, they won't be believable. You can add even more tension by adding another love interest for one of the main guys/gals. Now that gives you power!

One of the most believable characters I've read in a while was in the book Beautiful Disaster. He wasn't the main character, but he experienced change from the beginning to the end. Boy was he ever flawed! Succumbing to tempter tantrums, jealousy, and control issues were the least of his problems. It made me interested enough to turn the page again. These character flaws were so bad, he almost became the antagonist and he put the main character through hell.

Remember, every protagonist is on a journey of some kind. They must experience change from the beginning of the story to the end. Either a change of heart, beliefs, character, or something in their life. Without that change, you have a flat, static character.

Your reader wants someone they can identify with or understand. Give it to them.

What characters have you really gotten into lately? Why?