Dashing Dashes and How to Use Them

Happy Hump-Day, good people of the blogosphere! I bet you think you know all there is to know about dashes. Well, I'm here to tell you, you may not know as much as you think. This is a post you don't want to miss! So, grab those pens and notebooks and let's get going!

There are so many ways to use hyphens and dashes. This post is going by the rules outlined in The Chicago Manual of Style 15th Edition. First, I'm gonna show you what each one of the five looks like, then we'll go into how they're used. 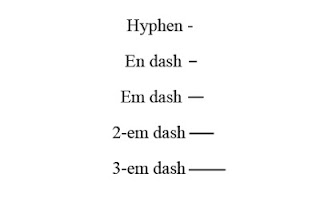 Hyphens, en dashes, and em dashes are the most commonly used.

Hyphens are used to separate numbers or group numbers, in compound words, names, and for word division.

A little known use of the hyphen is in dialogue when referencing American Sign Language.

Going into names and compound words is best left for another day. It's a whole section in and of itself.

It literally means "between" or "up to and including." It's used in dates or times or in place of a hyphen when one of the elements of a compound adjective is open. Some people would use a slash, but an en dash works as well. It can also be used to separate a college name from the city if there are more than two in the state with the same name. There are no spaces with en dashes unless indicating something is ongoing.

This one is for setting off elements in novels. Some people use parentheses, commas, or colons to do this; but an em dash works as well. It will also separate a subject from a pronoun, indicates a break in speech when someone is cut off (unlike when someone trails off—those are indicated by an ellipsis), or replaces a comma. You can use them with other fun punctuation as well—like exclamation points!—as a tool to set off the phrase.

Examples of em dash use:
Should I—can I?—go to the party tonight?
"I was thinking we should—" I cut her off with a lift of my hand. "No. Probably not a good idea because she'll be there."
When the old man walked up—and he was walking really slowly—we showed him the way to his seat.

2-em dashes are used to represent something left out. The rule here is: If it replaces a part of a word, don't leave space on either side; but if it replaces a whole word, leave space. A 2-en dash is most commonly used to block out profanity. Oftentimes, these are shown by using four hyphens.

3-em dashes are used in bibliography to indicate this name is the same name as the one before, but it's a different title or work. These are shown by using six hyphens.

I hope this helps straighten some of the confusion out. I find these errors quite a bit when editing.