The Writer's Voice - On Book Banning and Failed Opportunities

Happy Friday, good people of the blogosphere! Today, I'm calling out some folks for some crazy stuff that happened back in October. If you all remember, there was a huge upset with Kobo taking down a bunch of self-pubbed titles when an outcry arose over a few books that were pointed out as being completely inappropriate. Remember, these are my opinions. You have a right to your own. But grab your fiery temper and read along. See if you agree with a lot of these points. Let's get going! 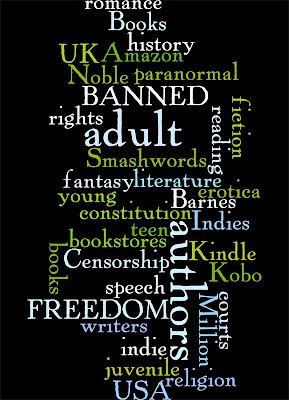 Now, from what I understand, a couple of books were called out as being inappropriate and this caused a ripple of fear to spread through the publishing world.

I'm not going to judge if any book is appropriate or not in this post, but I will say that anything involving child pornography in any form is not something that should be encouraged. On the same token, I'd rather have someone reading about committing those acts than actually taking part in them. But where's the line? I'm positive I'm not the right person to draw one. If we take the books away, do those people then seek to act on their desires in other ways? As a mother, that scares the ever-loving shit out of me.

For all else, to each his or her own. Judge not lest ye be judged is something I live by.

Those business had every right to pull whatever they felt they needed to in order to protect themselves. However, here in the good old U.S. of A, we have a little thing called freedom of speech. Many men and women of our armed forces have died to give us that right (and to maintain it) throughout the years. It's not something to be sneered at. A huge shoutout to those who protect my freedoms; without which I couldn't write this blog post.

While I understand the move on the part of the businesses involved in the massive removal of self-published books, I can't help but wonder at their thought process.

Why? Because, not only did they manage to remove the offending titles (which, again, I'm not 100% sure was right or wrong), they also removed books that were and are "safe" as far as the restrictions on age go. I hobnob with authors of children's books that were taken down. Those folks were outraged (and rightly so) because they felt the bond between them and their publisher was fractured.

Booksellers that are brick and mortar have long been in a precarious position where falling sales have caused the closing of a ton of bookstores. That's not an opinion; it's a fact.

An opportunity was lost by those bookstores by watching and not saying a word.

Truth be told, Indie authors are now nervous. If their books can be pulled down without rhyme or reason, how can they be expected to keep publishing with the same companies, never knowing if their revenue stream will be cut off tomorrow?

Why oh why didn't someone jump forward (even Mark Coker of Smashwords) and reassure Indies or give them something they can put their trust in? If a brick and mortar bookstore approached me tomorrow and told me they'd carry my books (even if just digitally) with a seal of approval that guaranteed I'd never be removed from their platform, I'd jump on it. Even if it meant removal of my titles everywhere else.

Now, it remains to be seen what titles will be banned from booksellers. In my opinion, Smashwords was so on top of it, it's crazy. They had a system to keep age 18+ books out of the hands of kids. But Smashwords also dropped the ball when it came time to offer reassurances to their authors. Get on it already!

But the biggest loss, in my opinion, is by the brick and mortar stores. They need a healthy author/reader/customer base that keeps growing.

What do you think of the recent actions by Kobo, Amazon, and some others? Were you one of the authors? How did it impact you?