Happy Thursday, everyone! I know, I know, my post is late! But I was working on something for a client, and I really wanted to get it to them before I took time to write my post. Now, it's a sit and wait game as I chew my nails and watch my e-mail to see if they like my ideas. I thought you might like to have an update on what I've been doing on the writer end. I have a snippet or two for you to check out, and I'm giving you updates for books that have been in the works for a while (in case you've been waiting for them -- yes, the e-mails and PMs about release dates can stop, because I'm gonna give you those, too!). So, grab a cup of coffee and join me!

First up, the sixth and final (maybe) book of the Mystic series, Markaza. Her story comes in at just over 56k words.

Update: Book is slated for release either end of May or early June. It's in the hands of my very capable editor now! EEP! In case you missed the cover and blurb: 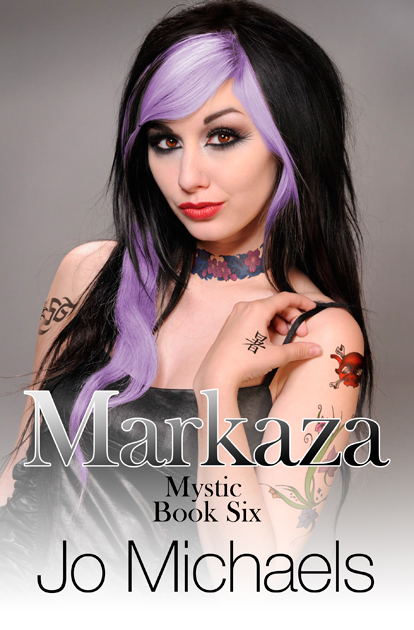 Markaza Turner isn't your average seventeen-year-old. She can see the future, the past, and has an eerie propensity for getting people to do things.

But what she sees is the obliteration of mankind. Worse, her visions tell her it's gonna happen on her eighteenth birthday, December 21, 2012.

All six of the ladies forming the elite group, known as WSTW, are finally together under one roof. Bronya, Lily, Shelia, Melody, Coralie, and Markaza must now figure out how to use their strange powers before an evil being rises from the ground in Central Park and destroys the world.

But Markaza's own past is dark and riddled with secrets she'll need to unearth and come to terms with before she can go to war.

In this exciting finale of the Mystic series, the women come face-to-face with a truth that will change their lives forever.

Our fate is in their hands.

And, here's a snippet:


He cleared his throat. “I think we all need bulletproof vests, personally.”
Markaza quirked an eyebrow at him.
“Well, you said that thing has claws, right? What if it comes down to an ability to puncture that wins or loses the fight?”
She snorted. “You haven’t seen the size of those claws. I think they’d rip through a bulletproof vest like a snake gliding through water.”
He blanched.
“Yeah. This thing is taller than The Clementine.”
He turned green.
“And all we have are our powers. I don’t think it has any weakness apart from love and forgiveness. With all our work with the shrink, we’re getting there; but I wonder if it’ll be enough. There are only six of us.”
“Eight,” he said.
She tilted her head.
“You have me, and you have Richard. Don’t count us out because we aren’t superheroes.”

Second, we have M. This is a standalone novel (you all know how I love those). It should end up around 60-70k words, but is sitting at almost 35k now.

Update: This title should be finished by the end of next week. Cover reveal will be June 1st, and release is set for June 18th. Here's a peek at the blurb and snippets:

In 2042, it finally arrives, the drug promising to make life easier for the masses. One dose of M and anyone can gain an ability. There are no promises made as to what the power could manifest as, but people are crawling over one another to take a chance.

There's a problem: One pill costs a million dollars. Only those with extraordinary wealth are afforded the luxury of cleaning house with a click of their diamond-adorned fingers or solving a puzzle by talking to it.

A knockoff is circulating that does the same thing as M. Hundreds of thousands of people have mutated for a mere fifty dollars.

Seventeen-year-old Griffin is a normal kid, who has a regular job, and dreams of going to college someday. When his girlfriend of three years succumbs to peer pressure, they break up. He believes the body is a temple not to be messed with outside of nature, and she wants to fit in. Once he meets the supplier, things take a turn for the worse.

He's left with nothing but pain in his heart and the desire to make them suffer when his plans for payback blow up in his face.

Thirst for revenge consumes him, and he finds himself locked in a battle he never anticipated with a merciless kingpin as they struggle to gain the advantage.

How far is too far?


Joey stuck his hands in his pockets and bobbed his head up and down. “Yeah, I get it. That’s what you have to hold onto; that’s what’ll help you do the hard things, the things you’ve been told you’ll go to Hell for, the things your mother would smack your face for thinking. At the same time, those are the things that have to be done.”
***

Earring Guy was sitting on the couch, his feet propped on what looked like an antique coffee table. No one said anything because they were at his house, and he could do whatever he wanted to the furniture. Not that anyone would’ve said anything either way. He picked at his teeth as he spoke. “I saw two people shift into lizards then back into humans—one male, one female—and a man who was winking a light on and off every time he blinked.”
Harry wrote the information down. “Well, that makes forty-seven different recorded abilities.” His eyes bulged. “How many possible manifestations could there be?”
“There’s no limit, H,” Ruby answered.

So, what do you think? Sound intriguing?