7 Cover Reveal Monday and How We Wrote the Book

Good morning, and happy Thursday, everyone! I'm so excited I can't stand myself. In just four days (on Monday) the cover reveal for 7 happens. It's completely different from anything I've seen on the shelves today, and the story inside is along those same lines.

Today, I'm gonna tell you all how we wrote the book(s). That's right, there's more than one. Yes, they'll be released as a set, because we feel you can't read one without having the others IN your hands.

As we created the story, we nearly drove one another nuts. *grin*

Why? Because of the process we used. So, if you're ready, sit back, relax, and let me regale you with a story on how this novel was conceived and written.

As you may know, the five of us, Casey L. Bond, Tia Silverthorne Bach, Kelly Risser, N. L. Green, and myself, all go to the author event Utopia. During the con, we set aside time to brainstorm new collectives. Our first attempt was Fractured Glass, which released at the end of 2014. It was so well received, and we ladies loved working together so much, we decided to write something else together. This will become a tradition. Every year, you'll get something new and different from us.

Anyway, we met in one of the rooms at the hotel with journals in our hands (surprisingly, we all brought the exact same journal) and started talking. Idea after idea was tossed around until we all said "oooooooh, yes!" at the same time.

Hours passed as we fleshed out our tale, and suggestions were received and added to the journal pages. In time, we had a plot that left us all with our bottom jaws swinging. We decided to all write in third person, past tense, with no restrictions on POV, and we fleshed out the main character.

Then, we gave it a title. Because of restrictions, we've taken to calling it 7. Not the word, but the number, because it's represented by this: 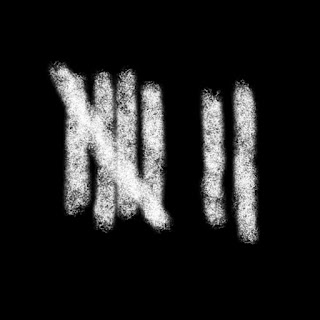 It was decided that we'd use our own names in the story, but we wouldn't write about ourselves. That task was assigned to the lady sitting to our right. How fun is that?

This novel has the following construct:

Yep. It has seven sections. But, until the conclusion (Part Six) was completely written, we didn't get to see what any of the other women had done.

It made for the most interesting construct I've ever seen.

We used Google Drive to write Parts Six and Seven, and we all penned it at once, like programmers do when writing code. Rapid fire questions and answers happened, and we've been blown away by our ability to pull it off.

I hope you're as excited about this book as we are, because I can guarantee you've never seen anything like it before.

And the story... Well, none of us knew what would happen in the end, so we hope you're as surprised by it as we were.

There will be a Goodreads giveaway that will start right after the cover reveal. Keep an eye out for that, and for the FACEBOOK launch party! YAY!

What do you think? Gonna try it? Eager to read the book? Tell us what you think in the comments.