Good Wednesday, people of the blogosphere! I'm revisiting an old favorite of mine: character creation. So, sit back and buckle up, grab your coffee and your notebook, and get prepared to join me on this short journey.

How long is your book? That's the first question you must ask yourself. If your book is part of a series, how much do you want to reveal in book one? That's question two.

Every character has a past, present, and future (unless you kill them off, you cad!). They all have a set of core beliefs and an intrinsic nature. These things should be decided upon before you ever put down the first word.

I cannot stress enough how important a character bio is. It will give you a document to reference when gauging how a character will react when placed into a specific situation where they have a decision to make. For example: If your character is very humble, they won't brag on their accomplishments in a group setting, take praise well, or be comfortable in a situation where they're the center of attention.

But a decision must be made on how to convey these values to the reader and if/when to tell the reader where the values were instilled in the first place. In a series, don't reveal everything about the character from the first book. Leave some to work in later. In your character bio, be sure and mark through what you have and haven't told in the story.

You do need to make your character 3D though. Show their emotions, living conditions, and perhaps even give a little background information. But those moments of reveal should come from things that occur during the story. Have a reason for showing the reader the past.

If you do the above, your characters will be loveable, connectable, and three-dimensional.

If you're writing Historical Fiction, you already have a good idea of how your character will behave. When I wrote Yassa, I knew Genghis Khan was very strict, believed in God, and was loyal beyond all else. I used his loyalty against him when I made him react to his wife's relationship with Jamuka. It provided tension that couldn't have come from any other source. His inner struggle was severe because of what he did. 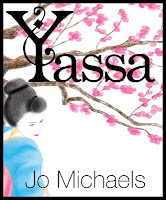 If you'd like to get an idea of how powerful characterization is, I've put Yassa on sale for the month of October. It's priced at $2.99. You can pick up a copy on Smashwords, Amazon, or B&N for this price (Amazon will update sometime today, Kobo, iBooks, and others will update throughout the month). Go pick up a copy and have a read. Then pop on over and tell me what you thought.