Happy Monday once again, good people of the blogosphere! I'm pleased to welcome you all back for a guest post by my featured author, Casey L. Bond. She's whipped up some alien goodness for you all to dive into today. I do hope you enjoy the tale. In case you missed it, her author interview was pretty stinkin' awesome, too. Check that out here. Casey is one of the ladies who'll be attending UtopYA Con 2014. It's coming up mid-June, so if you don't have your tickets yet, I urge you to get out there and buy them! Price goes up in February. Enough of my rambling, enjoy the show!

The candy-sweet scent of the Red Bull I just cracked open fills the air. I chug it for dear life. No sleep for three days makes a chick a little psycho, and paranoid. Every sound makes me jump. Of course, it could be the energy drink my insides are currently bathing in. This is my fourth can in the past hour. Gotta keep moving. I’m almost there.

I know they’ll find me the second I step out onto the sand. It’s too open. Nothing to hide behind there. But, I’m gonna get caught eventually, and I have to see the ocean once before I die. I chug the rest of my drink and throw the can over my shoulder. Maybe if we pollute the planet more, they’ll leave. I sling my backpack on again and take off into the night, crouching around trees, abandoned cars and houses, inching my way to the coast. I’ve made it this far on foot. The days have blurred together, but I think I’ve been off the grid for three weeks now. They think their technology is flawless. Well, think again jerks! I found a loophole and climbed through that mother feet first, slipped away in the night and never looked back. I’m gonna freaking make it!

Blood pumps fast through my veins and my heart is thumping with excitement. I can see the last row of houses that sit perched against the dunes. It’s almost dawn. The bastards can’t see so well at night. But, I am going to see the sunrise if it kills me—if they kill me. Maybe I can drink the rest of the case of Red Bull and see if my heart will explode before giving them the satisfaction of catching up with me again. Death by energy drink? Doesn’t sound like such a bad way to go. Death by alien a-hole? Much worse.

I run across the deserted street, ducking around the abandoned house. My fingertips graze the peeling white paint on the clapboards at my back. When I ran for it, I had nothing and had gained little along the way. I’d found a few energy bars and plucked a few apples off a tree that was rooted next to an abandoned swing set. The swings moved to and fro by the wind in lieu of children. No innocent laughter would be heard there again.

A chill runs down my arms, pebbling my skin. Most everyone left alive from the initial attacks had been rounded up and put in ‘containment’. In only a matter of hours, humans had moved down a notch on the proverbial food chain. It was from a containment facility, that I discovered a section of fencing that was dead. The section was small and a portion of the grid-like fencing had been peeled back. It was just large enough that I could squeeze through.

I wish there was something else I could do, somewhere else to go. But, when aliens land on your planet, they pretty much destroy everything in their path. We’d learned that the hard way. When the attacks started, everyone went crazy. Many were killed, others looted the stores and homes in an effort to survive. Now, nothing was left. I couldn’t live without food and fresh water. After the Red Bull was gone, I would have neither. All of the stores and homes that I’d stopped at along the way had been ransacked, looted or just destroyed completely. So, the cockroaches can find me and do whatever they do with people who escape from their prisons. But, I’m at least gonna walk in the surf, maybe even swim for a bit.
The sky is streaked with vibrant yellows, purples and blues. Billowy white clouds dot the sky, illuminated by the sun that is almost breaching the horizon. Show time. I kick off my Chuck’s and throw my socks over my shoulders one at a time as I rip them off my feet. All but skipping, I drop the backpack and then my shorts and tug my shirt over my head. Screw breadcrumbs, I’ve left a trail of clothing from the houses to the shore. Come and get me, douches!

The water is perfect. Early July is hot and it feels like I’ve just stepped into a freaking bath! So amazing! The waves crash into my knees, thighs and then stomach. I’ve never been a swimmer, so when a couple crash over my head, I reel myself in a bit. The salt water stings my eyes and nose, but it’s the most glorious feeling in the world. Reveling in the feeling of freedom, I wash out my greasy hair and forget all about time.

Unfortunately, I forgot to watch my back, too.

A throat clears behind me. Right behind me. I whip around as a wave crests over my shoulders. Oh, crap. That was fast. I’ll never get over how much they look human. Everything but the eyes. The eyes are like molten gold. His are no exception, and they are beautifully set within thick, black lashes that no man should have. “Come with me,” he orders.

“Nah. I think I’ll stay in for a bit. I’m on vacation.” He’s at least a foot taller than me and I’m five foot five, and beneath the fitted white t-shirt and jeans that are now soaked through, rippled muscles sculpt his arms, chest and stomach. Yummy alien.

“Vacation?” He ticks his head to the side and stares at me unblinking. Weird.

“Yep. Enjoying a nice day at the beach. You know, vacation.” I go back to washing my hair out with sand. It’s all I’ve got and the grit should take away the dirt, right. Clean dirt with dirt?

“You are number 2278950.” He looks me over and I realize I’m in only my dirty hot pink bra and panties. Covering what I can, I splash at him. I’m sure that my face and chest are flushed after that ogling. Diversion!

“Yeah. Extra. Terrestrial. Never seen the movie? Well, you should really do more research on your subjects. Anywho, my name is Ashlynn. Not 22—whatever. Got it.”

He moves fast. Without even disturbing the water, he’s in front of me. “Ashlynn.” My name sounds strange on his tongue, it’s as if he’s tasting it. “You must exit the water, dress and come with me. I’ve been sent to collect you. You will return to containment immediately.”

“Um, no. I really didn’t like it there. No offense. It was…No. It really wasn’t nice at all. I don’t think I’ll go back again.” Before my smart mouth can even close, I’m on the shore. His hands are on my upper arms. “How?” That’s all I can squeeze out.

“Do not test me, Ashlynn. I am offering to take you without using force.”

“Maybe I like the use of force. Hmmm? Ever thought of that?”

A crooked smile stretches over his face. My freaking weakness. Seriously? They’ve sent in the big guns to drag me back to hell. “I can show you.” His voice is like butter and before I even realize he’s moved, his lips are pressed hard against mine and he’s pushing me hard against him. Softness and mint glides over my mouth and moves ever so slowly and deliciously until I sigh and open up for him. His tongue and mine collide and my brain pretty much turns to mush, like the rest of my body that’s collapsing into him. He pulls back, breaking the kiss. It must be their secret weapon. Compliance by hot alien kisses. He didn’t even need cuffs, or whatever they use.

“See. This is what I really look like. We come from a planet much like your Earth. We look very much like you on the outside, although our brains function at a much higher level.”

“Your lips looked delicious. I couldn’t resist.” His lips claim mine again and I realize that I’m so screwed. I pull away and run toward my backpack. He doesn’t chase after me, of course, when you’re alien-fast you don’t have to worry about keeping up, I guess. Riffling around in my bag, I pull out another can of Red Bull. Within a blink of an eye, he’s five feet away from me. “Your weapons will not hurt us. Not for long, anyway.”

“What’s that?” I point toward the waves again. He turns his head to look and I launch the can at him. It pegs him in the side of the head and he turns around. Anger flashes in his golden eyes. Oh, crap. Now I’m really in trouble. He’s become the bull and I’m the red. I take off running away from the shore. I can see the house in sight, but don’t make it. I land in a heap, gritty sand all over my skin. Something heavy lands on top of me, squeezing out my breath.

“Wrong move, Ashlynn,” he grins again, just before covering my mouth with his. The sandy stubble along his jaw lightly and deliciously scrapes along my skin. Yummy alien. Le sigh. 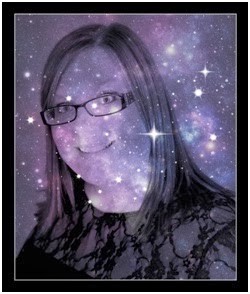 While you're all here and in the mood to follow this awesome author, why not check her out on her blog or over on Goodreads? Her book, Devil Creek, will be FREE on Amazon through the 17th! Click here to get yours now! 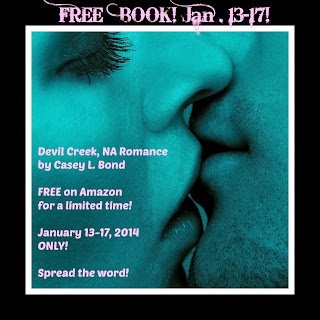 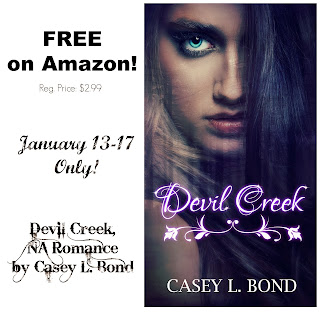 Don't forget! Today's the last day to grab a copy of I, Zombie free! It has 19 reviews with a 4.5* average! Folks are loving it! Get one here!

If you loved the short story above or have questions for Casey, drop a note into the comments section!