Happy Monday, good people of the blogosphere! This week we'll be delving into dialogue. I'll give you a total of fifteen exercises (three per day) you can do to make your dialogue stronger. Nothing ruins a great story quite like stilted dialogue, unnatural sounding dialogue, no dialogue at all, or overabundance of conversation. So, grab your pens and notebooks and let's get going! 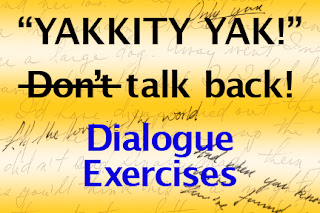 There are so many different ways to use dialogue to improve story flow. These exercises will help you overcome some of the things that stilt a story. Again, this series is part of the writing class I give over on INDIE Books Gone Wild.

Every exercise below calls for at least two pages of dialogue.

Exercise 1: Using dialogue to reveal setting.
Take two characters you've used in a past novel and throw them into a scene together. Only using dialogue, reveal to the reader what setting the characters are in. I'm asking you to use two characters you've written before so you have an idea of the types of things they'll notice. You may want to throw in a conflict here and have them argue about where they are. As another option, perhaps it's a place neither have been before and they're exclaiming over things they see. Remember, be gradual. No information dumps. What would they say?

Exercise 2: Using dialogue to reveal or convey feelings.
Write a conflict scene between two characters you've written that love one another. Do it from one person's POV then switch. Betrayed to betrayer. Feel what they're feeling and use it.

Exercise 3: Weaving dialogue, action, and narrative together.
Using one of the reveal scenes from above, go back and add action to the scene. Put in little facial clues or gestures to show the reader more. Try adding a narrator to the scene. Where would they comment on what's going on? Now cut 1/4 of the dialogue and let the action be the revealing element. Read for flow.

There are a number of things you can use dialogue to do. Rather than giving your reader a couple of paragraphs about the setting, give them lines where the character reacts to what he/she is seeing. Avoid the information dump.

I hope you enjoyed this post and did at least one of the exercises. Come on back tomorrow for more!