Jonathan Swift and The Bird

Happy Tuesday, good people of the blogosphere! Today, I'm going over a little something I used when writing The Bird: Writers of the past and their books. Most notably of the many tales I interweave is that of Gulliver's Travels, written by Jonathan Swift. Grab your pens and notebooks and let's get going!

First, some interesting facts about Jonathan Swift from Wikipedia:
He looked like this: 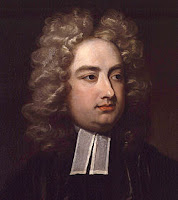 Now, if you've read The Bird, you'll know my heroine, Stormy, visits the grave of Mr. Swift at St. Patrick's Cathedral where she finds some rather tiny people. When I considered her quest and the golden apple she needed to procure for the witch, I thought how lovely it would be if Stormy had to face some Lilliputians. Seeing as the author of Gulliver's Travels was from Ireland, it made sense in my head to morph the little boogers into the gold-hungry, top-hat-wearing, shillelagh-carrying meanies we know as leprechauns.

Elves get a makeover, too.

I took a number of fairy tales I love and selected elements from them to weave a new-age story. To add to the realism, I also used a number of locations around the world to place scenes in the book. Did you know there's actually a place in Pennsylvania called Ringing Rocks?

It's these things that one must use to bring the element of believability to a fantasy novel. A world, changed ever-so-slightly, that reeks of truth. This is what I mean when I say you should write from life.

If you create another world, you're still using elements of something you've read about or experienced. Try using them in new ways. Step out of the box for a moment and reconsider everything you've been told. Put a new twist on something you know. Writers have awesome imaginations. Give them a workout.

Last, but not least, remember to always have truthiness in your tales. Never be afraid to take that extra step or go that extra mile. Use that word or phrase you've been wanting to. Speak your mind. Indies rock because there's no one lording over them, telling them what they can and can't say.

Is there something you've used from experience or prior readings? How did it spin your novel?