Happy, happy Monday, good people of the blogosphere! Wow. I'm totally late again. But at least I got something written and posted today, right? So, we're gonna talk about this lovely thing I like to call imagination. Basically, I'm going to tell you where you can steal characters and it be on the up and up, and how anyone that tells you otherwise is full of mahoney. Grab those pens and notebooks and let's get going! 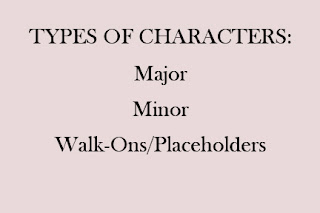 And you know what? You'd be right on every count.


There's no such thing as an original character.

Are you ready to rip my face off yet? Good. Now, let me explain.

Your characters will all have an inherent piece of you. Yes, all of them. When you have to write anger, you draw on your own experiences with anger. In this way, it's impossible to write what you don't know. If you happen to come upon a feeling you've never had, chances are you'd have to ask someone else what it's like. Therefore, your character takes on a few basic traits of that person.

Writing that woman you watched in the airport who was oozing emotion through the phone at what you could only guess was a man? She's totally unique and not you, right?

Because what you've seen of her brings you to certain conclusions of your own about who she is. You draw upon experiences you've had in the past to fill in the rest of the proverbial sketch of her life.

But what about that character that came from nowhere? You just sat down, chose a name, created an identity, and drew them from thin air, right?

Let's think about that for a moment.

While that character in the book may have purple hair, pointy ears, and a forked tongue, you have to create a personality from somewhere. If you don't use your resources: yourself, a friend, a stranger you spoke to, a family member, a character you once read about that stuck with you in personality, an old classmate you hated/loved, etc..., you're setting yourself up for failure and flat characters.

There's no such thing as an original character. Even if the man or woman in your book has one small piece of you, it's not 100% unique. They must have some part of someone to be real.

Aren't they? Don't they talk to you when you're writing them, telling you how to write their story so the world sings along? Don't they force your hand sometimes?

I don't know a writer anywhere who says, "My characters do exactly what I tell them, and my story doesn't suffer for it." Yeah, that's not the way it works.

We create these people, and they go with us everywhere. I'm almost convinced those crazy people who walk around mumbling things to themselves aren't crazy at all; they're retired authors talking to the characters that refuse to leave.

They're in your head. You formed them. You breathed life into them. They're all going to have a piece of you, no matter how miniscule.

Guess what that means? If you're a lot like author ABC over there, and the two of you have had similar experiences/pasts, your characters might just act and sound alike.

Nothing wrong with that.

So, the next time friend A asks you if they're in your book, smile at them and nod your head. Chances are, there are enough pieces there to make it the truth.

But never, ever be afraid to steal bits and pieces of those folks you meet on the street or watch on the sly. They'll inject your characters with new traits.

What do you think? Have you written a character who acts/sounds like someone you know (accidentally)?