Happy Monday! Oh man, what a crazy couple of weeks this has been. Anyway, I have some awesome news for you. *grin* I was struggling with how to do this, because the blog is a public thing that I want to keep appropriate for ALL ages, and my new book isn't for those under the age of eighteen.

Yeah, there's some strong language in there. My guy is in prison. I kept it real. There's violence, too.

So, how do I let you read chapter one while keeping the blog a "safe" place for everyone?

I decided to use Wattpad as a buffer. They check the age of anyone on the site, and I was able to mark the content mature so it can be moderated appropriately.

Don't forget to join the Facebook party here. If you're interested in helping out with the release day stuff, fill out this form. And if you want an ARC, fill out this one.

Without further ado, here are the details: 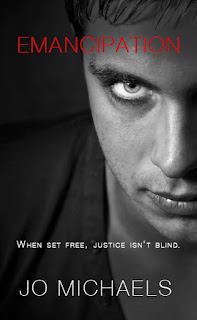 Title: Emancipation
Genre: Psychological Thriller
Blurb:
Tobias Butler has been sitting on death row since being sentenced for a gruesome murder in 2007. Bored out of his mind, he decided to apply to the online pen pal program in 2012. It's a pleasant distraction—nothing more, nothing less—for three years, until he's contacted by a beautiful, smart young lawyer named Jess. She's convinced he's innocent and wants to see him freed. As they organize their attack on the judicial system, he wonders how she plans to get his conviction overturned—because he's guilty, and he knows it. Jess is desperate to release him—and he's desperate to feel his hands squeeze the life out of her once she does.


Add to your Goodreads TBR HERE.

Come on back here and tell me what you think.

I hope you enjoy. Seriously. It's gritty.