Happy Friday, good people of the blogosphere! I hope you all had a fantastic week and are looking forward to the long weekend. Perhaps you want to use that time to craft new book ideas. Well, you've come to the right place! Today, I'm going over how you can steal plots from real life to craft novels. Intrigued? Then grab those pens and notebooks and let's get going! 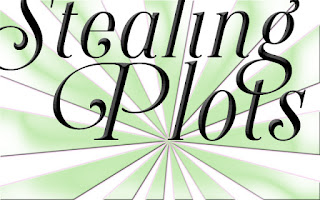 If you remember the posts I did on plot ideas (part one and part two), you'll know I'm a huge advocate of using things you see/read/hear to inspire you. Well, let's look at life for some inspiration and see exactly how that works.

Situation one: You're sitting, watching the news, and a story comes on about terrorists on a train and three heroes who leap in and save the day (anyone remember this?). That's an awesome story, right? Those men have been talked about often since that day.

Situation two: Friend one calls you, sobbing. Her husband was part of the Ashley Madison scandal, and your friend has discovered he's had multiple affairs. Her life is ruined, and she tells you all the warning signs she saw but ignored as you try to make her feel better.

Let's break down and re-work both situations for awesome plot ideas, shall we?

Situation one: What if the terrorists were vampires and the heroes were slayers? Or, what if they were all women instead of men? What would've happened if it were some kind of plot to get rid of a different terrorist who was planning to bomb the train, and the men sent to stop it were thwarted by the "heroes" who thought they were doing something good?

Situation two: What if the husband wasn't cheating, but he'd been doing some kind of recon mission for the CIA or some secret organization? All the "warning" signs weren't what they seemed, but the wife has no way of knowing because she doesn't know he's a spy/assassin. That's a whole different story.

It's not the situation that matters; it's the details you want to store away in your brain for the book you can write with these ideas that are important.

What caused those men to react? What were they thinking? What did they see?

What were those "warning" signs your friend is talking about? How did her husband act? What excuses did he use to get out of the house and meet up with those women?

All these questions can be answered by watching interviews or asking questions. Be the sleuth. Be creative. Bend the world to fit the story you want to read, and write it.

Whether you're a paranormal, contemporary, fantasy, dystopian, contemporary, murder mystery, or other genre author, you can make your story and characters feel more real to your reader when you use real-life situations as the basis.

So, this weekend, my challenge to you is to take something you see on television or hear on the news and turn it into a plot for a novel in your genre.

Post them below! Let's see how creative you can be!

Well, that's all for today, folks. Until next time, WRITE ON!