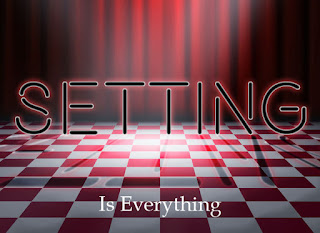 Happy Monday, everyone! Hope you all had a fabulous weekend and are ready to start the awesome week ahead. No? Well, grab that coffee and let's talk about setting. You know, that place in your story where your characters dwell.

There are two ways to go about giving setting:
1. The old way of bogging people down with pages and pages of "what the character sees."
2. The more interesting way of putting the character IN the setting and letting the reader know how it feels.

Why? Because it's more interesting to read and keeps folks from paging through your book really fast.

So, what's the difference? If you aren't sure, I ask you to recall a book you read in some time and space where your eyes glazed over as the author described the trees, flowers, and sun.

Now do you know what I mean?

Let's get the hell on with examples, shall we?

Example of style 1:
Juniper sat on the stone bench and stared at the water after her breakup with Harold. Red roses bloomed in abundance, their thorny stems intertwining. Next to them were pansies in every color of the rainbow. On the water floated boats with giant, white sails billowing in the wind. Across the water stood the poor houses. She used to live there. People were standing outside or sitting in chairs, doing nothing. A couple of children were playing in the many puddles on the street. Broken down cars with weeds growing out of them were scattered here and there.

And so on, and so forth.

Now, let's give style 2 a try:
Juniper sat on the bench, the cold of the stone seeping through her shorts as she stared at the water, wishing it would bring calm with its lapping sounds. Red roses bloomed near the shoreline in abundance, their thorny stems intertwining like lovers in a secret embrace. She couldn't help but think how, just hours before, she was in a similar embrace. While the roses would be strong, her love was broken.
Why did it have to be that way?
Through the ship sails, she could just make out the poor houses on the other side of the river where her family lived. Once upon a time, she was one of the dirty children playing in the puddles and around the abandoned cars--those weeds growing out the windows and doors gave her hay fever more times than she cared to mention. But she'd gotten out of there.
What about that didn't Harold understand?

This isn't a vice I suggest you use often. Page after page of anything like that will get old. However, if you're in a key scene, you should get your reader invested in the story by pulling out all the feels.

In the first example, you're looking at the scenery as an outsider; in the second, you're feeling how it might impact someone.

There's the key to engaging the reader in a show, don't tell, situation. Again, telling is for the parts where not a lot is happening and you don't want the reader to slow down and pay attention. More on showing vs. telling in this post.

Care to give it a try? Revamp a scene and share with us!