1500? The Nightmare of the Little Dog

I am sitting at my computer, typing away, when all of a sudden my maltchi, Tucker, begins chasing his tail. Round and round he went until suddenly, he stopped and looked up at me with his furry little face then opened his mouth and roared like a lion. I have to say, I was taken a bit aback and was a bit frightened out of my wits. Okay, I was terrified and confused! When his roar came to an end, he charged me, snarling and gnashing his teeth like he was going to have me for a snack.

I jumped off of my chair so quickly it turned over and I ran for the bathroom so I could get behind a locked door. He is just a tiny dog and there's no way he can come through a door, right? Wrong. I got into the bathroom and shut and locked the door just before he was able to grab my ankle with his sharp little teeth. While sitting in the bathroom, my mind went haywire as I imagined all kinds of scenarios to explain the reason for my dog's behavior. I thought, maybe he was bitten by a werewolf, perhaps he ate some bad food, and I even wondered if maybe he had cat-scratch fever - because of the lion roar.

He started hurling his tiny body against the door at an attempt to break through to me. After just four hits, the door began to splinter and I began to shake. Tremors started at my feet and, after just a few moments, my entire body was vibrating so hard I almost threw up. I knew I was going to die. That knowledge sickened me and made me cry for the loss that so many people would suffer. What would my kids think? Who would care for them when I was gone? How would my parents handle it? All of these questions had no answers but caused me to straighten my back, force down my gorge, and control my tremors so I could think straight. I began to look for a way out.

After searching the bathroom for a minute, I noticed that there was an air duct in the ceiling. I quickly stepped to the top of the toilet and took out the loose screws. I hauled myself up into the shaft at the same moment that the bathroom door shattered and my little Tucker came bursting through with a wild look in his beady eyes. I narrowly escaped being eaten.

This is my little Tucker: 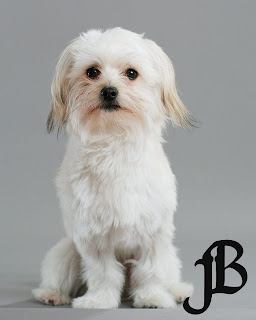 He looks terrifying, doesn't he? Perhaps he was just angry that I made him pose for photos.

Yes, the above is a bit of hyperbole. Okay, a LOT of hyperbole!! But it was entertaining, no? :)

Really and truly, the reason I only wrote 1500 words yesterday is because I was working on Valentines for my loved ones. Personally, I like the nightmare of the little dog a bit more.

I hope you were entertained today. I am off to write some more BOOK!! It is 9am, after all, and I am good and warmed up now.

Until next time, WRITE ON!!