Happy Tuesday, good people of the blogosphere! Everyone back to work, kids back to school, and writing time abounds. I wish your muse upon you today. May your words be plentiful and your key strokes be numerous. Today, I'm talking about one of the most important aspects of writing: viewpoint. I haven't really touched on this subject before, but I think it bears talking about. Grab those pens and notebooks and let's get going!

First and foremost, you must grasp the difference between the different viewpoints. Here's a little image to refresh your memories of English class: 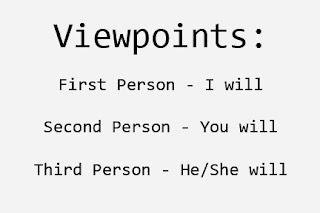 First person gives you the ability to see inside the character's head, convey their thoughts directly, and see the world through their eyes.
Second person puts you in the character's shoes, tells you what you should be feeling and thinking, and shows you the world from your vantage point.
Third person is from an outsider's point of view, and they can be either omniscient or limited in what they see.

Most stories are set in first or third person, though I have read fiction written in second that was very well done.

Example of first person (excerpt from Yassa):
My father and I were already outside, preparing our horses for travel, when the sun decided to lift her sleepy head over the horizon to reveal a clear sky and a day that would be perfect for our journey over the grassy steppes. It was a cool spring morning and the light reflecting off the mountain near our home, Burkhan Khaldun, made pretty patterns of light on the ground near my feet. In the dim light, my nervousness seemed amplified and even the soft sound of mice scurrying across the ground to store the grain they were stealing set my nerves on edge. My mind kept wandering off repeatedly as I asked myself a million questions about the girl I was to marry. Was she pretty? Was she a hard worker? Was she stout and able to bear many sons? What if I’m not attracted to her?
I squelched those thoughts when my father stared at me with his stern face. He looked different that day, angry and a bit sad, almost as though he could read my mind and feel what I was thinking. It was very unsettling for my tender, young conscience and only amplified the problem of my twanging nerves.
***

As you can see, it's written from Temujin's POV. What's good about this option is that you know everything there is to know about the main character. You're put in their shoes directly and can be pulled into what they feel as they plod through life or their journey. What's limiting is that you can never see into any other character's head; only have conjecture via actions/expressions.

Example of third person limited (excerpt from The Bird):
As the sun began its journey into the sky, Stormy watched it with intensity. Somehow it seemed brighter, like it knew that day would be different. She sighed and lifted her coffee to her lips, blowing the steam away. A tentative sip later, she relaxed into the chair as the warm liquid made its way down her throat and made her feel at home.
Her thoughts turned to the reason she was there and a great wave of sadness passed over her. Mom only had about two months of life left, and Stormy wasn’t sure she’d be able to stand it when the family matriarch died. They’d been through so much together and butted heads so many times it was ridiculous. But the love was there, and that’s what mattered. Stormy’s eyes misted up as the memories of chilly Christmas mornings and pushes on the old tire swing played through her head.
A bright red cardinal, with a very black mask, perched in a bush nearby and cocked his head to the side as if to say, “Hello. What are you doing sitting on my porch?”
She laughed softly and spoke to it. “Hi, yourself. Your porch, eh? I bet you’re a happy bird this morning. It looks like it’s gonna be a beautiful day. Why are you up so early? Oh, right,” she snorted, “the early bird gets the worm, huh?” Another chuckle escaped her lips and she wondered if she was losing it. After all, who in their right mind would talk to an animal?
***

This is written from an outside observer's POV. I choose to write in third person limited for almost everything I do. One of the strengths of this style is being able to change characters as you flow through the story, giving greater depth to a scene. But, if you've read The Bird, you know there has to be a break indicator when you switch. This allows you to show the story through two sets of eyes as it moves along. One of the weaknesses of this style is the inability to change viewpoints without some kind of break, after which you must clearly explain what's going on and who's POV you've changed to.

When writing from an omniscient POV, you can move around, over, and through time and space with your reader, jumping into any character's head at any time without any break indications. You can also give overviews of the collective actions or thoughts of the characters. But omniscient is difficult to pull off without the story jumping into what we know as a "head hop." This is when you've written most of the story from one character's POV, only to jump to another character occasionally. If writing in this way, you must remember to stay true to the all-knowing being all the way through the book. A difficult task, at best.

So, how to choose between POVs? Answer these questions:
Once you answer those, you can decide how to proceed. Most often, your story will be told in either first or third person. Once you decide between the two, you'll probably have a good idea of how you want to tell your tale.

Your second consideration is tense. This is what we'll go into tomorrow.

What's your favorite POV to read/write? Are they the same?