I, Zombie Release Date and News

Happy Thursday, good people of the blogosphere! I'm running a bit late today. Yikes! Today, I'm gonna share with you some of the details about my upcoming release, I, Zombie. I know you've all been chomping at the bit to get hold of that book, so here's some news!

First off, I've settled on a cover design for the book. Isn't it pretty? 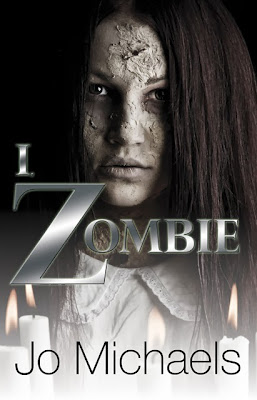 Title: I, Zombie
Author: Jo Michaels
Genre: Young Adult Horror (recommended for 13+ because of a little gore)
Release Date: January 8, 2014
Length: ~ 51k words (subject to change)
Price: TBD
Synopsis:
It's the end of the world as we know it.

Trixie Collins is a normal teen making her way through high school. One night at a party, a boy comes on to her and won't take no for an answer. As she jerks her arm away, his fingernails cut into her skin.

When she finds her dog's mutilated body and realizes she's to blame, she starts to think maybe the zombie apocalypse they've been screaming about on the news isn't a hoax after all. Worse, she begins to think maybe she's one of the infected.

Now it's a fight for life as she joins together with her brethren to stop the humans intent on destroying them. Are zombies all bad, or is it just a huge misunderstanding?

Would you all like the updated excerpt? Yeah, I knew you would! Well, here you go:

Bang, bang, bang!
As the axe struck the thick wooden door, the windows of the deserted house rattled in their frames, sending curls of fear through the forms huddled inside. Unintelligible moans erupted from their mouths as they pressed together.
Trixie sent out a thought: “Calm. Don’t let them hear us; maybe they’ll go away.”
When the groans died down, they could hear the humans outside walking the perimeter of the structure, looking for an entry point.
Twigs snapped.
Leaves rustled.
They were coming.
Shuffling of the beings increased and a small hand found its way into Trixie’s. She knelt down near the child and put her scabby forehead to his. He seemed to understand this meant: We’ll be okay. And she felt the tension leaving his body. They stayed that way for a few minutes until a human shouted out, “Here! I found a way in!”
Instantly Trixie was upright, willing her brethren to move from their corner, closer to the blacked-out window she intended to smash to make an exit. It was the only route they had. As one, they shuffled toward it.
A prayer was offered up that the humans wouldn’t recognize the window for what it was and avoid it. Prior inhabitants had done a good job of making it blend with the wall.
“I can’t get this door open!” It came from one of the female hunters.
She sounded like she was in the basement.
Off the kitchen, a doorknob jiggled.
Guttural moans erupted from the group again.
Trixie could barely make out the heads of huge nails protruding from the jamb. Those uninfected would have to have a crowbar to get that entrance open. She sent out another thought: “They can’t open it. Be quiet.” At once, the low droning stopped.
Her group continued to move slowly.
She hoped they could make it to her jeep. Dragging her numb right leg, she did the best she could to herd the others toward the soon-to-be exit.
When they got to the house, they’d done what they could to fortify it against the humans giving chase. It was sheer luck the earlier inhabitants had already reinforced most of the windows, entrances, and exits. She snickered. Apparently, the threat of zombies caused people to do strange things. With speed she didn’t know her group possessed, they moved to secure the house against the certain death on their heels like the hounds of hell. Couches and La-z-boys were stacked against doors, and the fridge was used to reinforce sheets of wood nailed over large, picture windows.
She wished she could speak; but the rot invading her skin had eroded her vocal chords. While she had a strange connection with those who were like her, allowing access to their minds, she couldn’t communicate with humans.
This was supposed to be a rescue mission. It was an easy in and out trip. She’d received contact a few days prior from three members of a family hiding out in a barn. A team of amazing fighters had volunteered to join her to bring the family back to the camp safely.
But, here they were, trapped in a run-down house, about to get their heads squished.
More banging echoed through the house, eliciting gasps and shivers of terror from the group.
It didn’t do to attack humans, and she tried to avoid it whenever possible. But if they were a threat, she felt certain her squad wouldn’t hesitate to do whatever they had to.
“We’ll have to do it. We can’t move fast enough to run and there’s a child here.” It wasn’t speech, but she heard it like she would someone speaking out loud to her.
Jack grabbed her hand, his voice still echoing in her mind.
A moment passed between them and her shoulders sagged.
There was no way to avoid it; the humans would have to be killed or assimilated.
Jack lifted a chair and mimed throwing it through the window.
She nodded.
Glass exploded in a whirlwind of tiny sparkles as the momentum of the chair forced it apart. Two of her unit members guided the family of three through the opening and the ones left behind tensed for battle.

Last, I'm sharing the giveaway that starts tonight at midnight over on Goodreads! *squeals* It's gonna run for the next month (through Jan 17th) and might be a great late Christmas gift for the reader in your life. Four printed, signed copies are up for grabs (U.S. only).

See the giveaway details
at Goodreads.


I'll be slinging the widget onto the sidebar for the duration. Good luck!