Writing What You Don't Know

Happy Thursday, good people of the blogosphere! Wow, what a busy couple of weeks here on the blog, eh? For the next few posts, I'll be talking about some of the things suggested on day ten of the twelve days. If you missed that post, just click the name and you'll be able to see what I'm talking about. So, today we're gonna discuss writing what you don't know. I have some posts on writing what you know and using a memory bible to keep track of places you've visited and things you've seen. But what about when you want to put your characters in a fantasy land or have them visit a place you've never been? I'll give you some tips and tricks on how to keep that straight. Grab your pens and notebooks and let's get going! 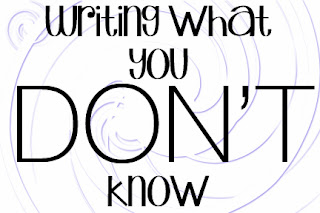 I've said it a lot here on the blog: The best fiction is based in fact.

That will be a constant. No matter if you're writing science fiction, fantasy, or anything that requires you to think outside the box.

Rules:
In most works of fiction, the same rules that apply to the world around us hold true. Gravity, human survival (we need food, air, and water), human nature (reactions to things, love, betrayal, etc...) hold pretty constant, and other such things that are seen as everyday (sky is blue, leaves are green, etc...).

But what if you're writing about a world you've made up where the sky is pink, leaves are silver, and people no longer need air to breathe?

Here are a few tips that will help you when you're writing about something that isn't:

To give you an example, one of my works in progress is called M. In that not-so-distant future (2024ish), my characters get around their city on sidewalks that move at incredible speeds and are powered by the sun. Before I wrote that little bit of information, I did a lot of research. It seems there have been a number of attempts at making these fast moving sidewalks and detailed descriptions of just how they would work. Score! I could explain to my reader exactly how people would use it because I had a full grasp myself.

If you're going to break a "rule," be sure you have a reason and an understanding of how your fantasy idea could happen. Even if on another planet, be sure and explain why the world is the way it is or how we can survive there.

Now, if you're writing about a place that actually exists, you need to do some of the same research with a little modification here and there. Try these tips on for size:

In The Bird, Stormy visits a place called Ringing Rocks National Park in Pennsylvania. I'd never been there, but I did a massive amount of research about the area and imagined how I would act if I were in her shoes. Turns out, I'm kind of a big ole kid. And she has that playful, whimsical attitude as well. I had her click the nails in her boots on the rocks to make them ring out.

Even though I'd never been there, I made it seem like I had. I was writing what I didn't know, but learned about.

What it all boils down to is this: If you're writing what you don't know, you must make it something you know before you can write about it.

It's all kind of an oxymoron.

You have to immerse yourself in the world and know every possible outcome of every action. If someone jumps and your world has light gravity, how much further will they go? Things like that. Be sure and keep a word or notepad document on every book. Yeah, even those that are based in fact. Dates and descriptions are important, too!

You don't want to say the sky is pink because there was an increase in dust and pollution in the atmosphere that causes the light of the sun to refract differently, only to contradict yourself in the next chapter.

What have you written that you didn't know?