Happy Thursday, everyone! I know you're all excited about the approaching weekend, but stay with me today. I'm going over one of the most common errors in writing (again). Why am I bothering to write about it now if I already wrote a post about it last year? Well, because that one got a little buried in the sand (archives) and it's something every author needs to be aware of. Misuse of pronouns is the thing I find most often when editing or reading; and, I'm sorry to admit, the one error I make consistently when writing. Ready? Grab those pens and notebooks and let's get going! 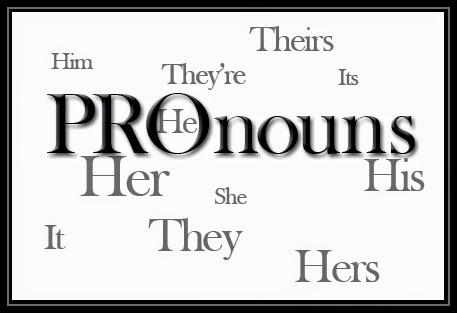 First off: What's a pronoun?

A pronoun is a word that's used to replace a noun. He, his, him, she, her, hers, it, its (no apostrophe), their, they, they're, and theirs are the ones to watch out for.

When should you become hyper-aware of pronouns?

Anytime you're following up naming a person or thing by using a pronoun.

Examples of misplaced pronouns:
Larry looked into his dad's eyes. He noted the sadness there, and wondered if his mind was on the task they were doing. His hands dug into the soft dirt like they had for the last thirty years. Would he ever get used to seeing him this way? Grabbing a handkerchief from the toolbox, Larry used it to wipe his face.

Quickly! How many misplaced pronouns were in that paragraph?

I'll give you a moment to look it over.

Answer: Four out of ten are incorrect.

To find the ones that are wrong, we replace each pronoun with the last person or thing named. I'm going to number the pronouns so we can discuss after, keep the ones that refer to Larry's dad as "Dad," and break it down once I'm done. Errors are bold.

Larry looked into (1.his)Larry's dad's eyes. (2.He)Dad noted the sadness there, and wondered if (3.his)Dad's mind was on the task (4.they)Dad's eyes were doing. (5.His) Dad's hands dug into the soft dirt like (6.they) Dad's hands had for the last thirty years. Would (7.he) Dad ever get used to seeing (8.him) Dad this way? Grabbing a handkerchief from the toolbox, Larry used (9.it)the toolbox to wipe (10.his)Larry's face.
Ugh! Right?

So, how do we fix it? There are many ways. Here's one:
Larry looked into his dad's eyes, noting the sadness there, and wondered if his mind was on the task at hand. His fingers dug into the soft dirt like they had for the last thirty years. Larry wasn't sure he'd ever get used to seeing the strain staring back at him from those eyes. Grabbing a handkerchief, he used it to wipe his face.

It's all about wording and construction. I know you probably think pronouns are the least of your worries, but a little bit of attention paid to this tiny thing will help your book tremendously in the long run.

These are rules that can't readily be broken without seriously confusing the crap out of your reader. Now that you know what to look for, scroll back up and read the first paragraph again without the breakdown.

Heck, I know I miss a couple when editing my own work or the work of other people; that's to be expected. I find errors like that in traditionally published books, too (though few and far between). But four in one paragraph?

How about you? Have you become pronoun proficient? Or did this post teach you something new?