Excuse Me, is Your Caps Lock on?

Happy Thursday, everyone! Book review tomorrow! I know you're all excited as can be. Today, I'm bringing you a little information on when to use a capital letter. Seems like a no-brainer kind of thing, huh? Well, it's something many, many people confuse, so I'm gonna touch on it. Grab those pens and notebooks and let's get going! 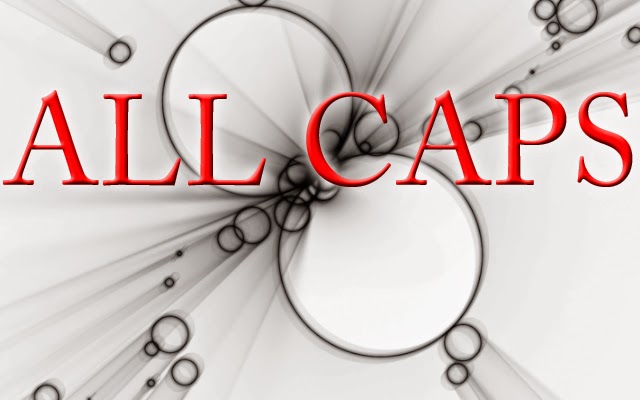 DON'T YOU HATE IT WHEN FOLKS DO THIS?

But caps lock isn't what we're talking about here. This is all concerning those horrible things called proper nouns.

Because, in the first, you aren't using the term as a proper noun. Terms like doctor, sweetheart, sir, madam, etc... aren't proper nouns and shouldn't get a capital letter. These are terms of endearment, not names or titles (even with titles, there's a caveat, as you can see above).

When you're talking about a thing, a word that might be capitalized in a different use might get a capital letter. Examples:

I was going to make life hell for her.
I thought I was living in Hell.

Second one is the place, Hell. First one is referring to the state of living, not the place.

I dug at the earth with my hands.
I'm from Earth.

Same situation. Lowercase earth is referring to the dirt, uppercase to the planet.

Given names get caps.
States get caps.
Your Majesty gets caps.
Our King or our Queen gets caps, but not when saying something like: He's the king of all he sees. Only when you're referring to the actual monarch should you capitalize the title.

I hope this helps you avoid a little bit of confusion.

What have you put a capital letter on only to go back and smack your head over it later?